According to the principle of double effect, sometimes it is permissible to cause a harm as a side effect (or ''double effect'') of bringing about a good result even though it would not be permissible to cause such a harm as a means to bringing about the same good end. This is more than a principle, it in fact is a part of the doctrinal teachings and beliefs of the Catholic religion and has traditionally enabled the rape of countless Catholic children while helping to develop the currently active and ongoing cover up of those crimes through the unprincipled use of this doctrine and process and by any others means it has access to. 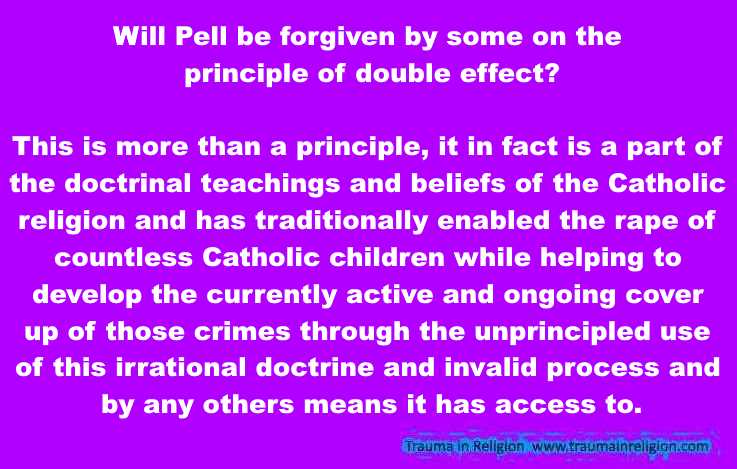 When this principle is considered instrumental in relation to the rape of women and children within the Catholic Church it appears in many many doctrines and justifications for horrific crimes, wars and theft of the property of dieing indoctrinated Catholics.

How many Catholic children have had their rightful heritage stolen from them on the deathbed of a parent? If legends are to have a basis in history it will be that of Catholic undertakers who cajoled,manipulated or terrorized the dieing victim into signing their entire wealth over to the Church and denying the children their rights in the process

The principle states that an action having foreseen harmful effects practically inseparable from the good effect is justifiable when the following 3 conditions can be deemed to be true:


[Condition 1 The Act] the nature of the act is itself good, or at least morally neutral;

[Condition 2 The intention] the agent intends the good effect and does not intend the bad effect either as a means to the good or as an end in itself;

[Condition 3 The effect] the good effect outweighs the bad effect in circumstances sufficiently grave to justify causing the bad effect and the agent exercises due diligence to minimize the harm.

When the Royal Commission asked the now convicted pedophiles George Pell if it was "common knowledge" that Ridsdale abused children "It's a sad story and it wasn't of much interest to me" tells of the disinterest in accountability that has been allowed by this and other Catholic doctrinal teachings.

First documented by Thomas Aquinas in his compendium of all the main theological teachings of the Catholic Church. See Wikipedia Principle of double effect and Wikipedia Summa_Theologica

The Catholic Church today is still able to justify (after successfully deploying this harmful tactic for century after century) putting aside the morality and ethics of its commandments and stated healthy normal humane principles so that it can go to war and kill whatever millions it deems warranted on the basis of these 3 conditions. Given that these conditions can be applied in a range of decisions made by the Church and by the people who have been integrated fully into the legal systems of the countries where Catholicism engages in high risk mind games with the population of those many countries.

[Condition 1 The Act] the need to service the sexual needs of clergy without losing position or status in their heavenly journey in their expected next life. To stand in the way of that is successfully argued as a breach in the right to practice a religion. This allowance continues to be used by the religion to hold the world to blackmail at the cost of the lives of millions of raped and abused men, women and children over the lifetime of this religion..

[Condition 2 The intention] to elevate the child in the eyes of fellow pedophile clergy as the child is favoured such that they get to innocently provide a service that the cleric is forbidden from undertaking himself. From the perspective of clergy they are simply wanting to obtain perpetual existence. The balance will and does go firstly to the wants of a man of the cloth. The child has been honored through the attention of the clergy.

[Condition 3 The effect] the good effect for the clergy outweighs the bad effect in the needs of clergy. Covering up those crimes is the exercise of due diligence by everyday Catholics to minimize the harm and to protect clergy from the laws of the country in which they operate. This brings understanding and reason as to why so many Catholics are still unable to process and understand the reality of the crimes their clergy and religion have committed.

This formal process is simply one of many processes and methods by which the Catholic Church is taking the world to a bizarre, inhumane level of insanity in 3 easy contrived and constructed steps.

The bare-bones of the Catholic 3 step justification process.

Try this out so you can form a doctrine that can become law in the Catholic Church in a democratic process where you get to set the conditions and to vote on the conditions others develop and set as their divinely inspired doctrine.

Do you establish Condition 3 first and develop Condition 2 from that so you can construct Condition 1? What is currently desirable?

Condition 1 or the nature of the act is itself good, or at least morally neutral. This when taken from the perspective of those in the hierarchy or a pedophile clergyperson are the same people who keep justice processes for their rape victims blocked for the duration of the victims' lifetime.

There is no need for a greater reason to protect the human rights of the children of Catholics who have had their lives stolen from them or are in the process of having their life and the lives of their children stolen just as the lives of their predecessors have been stolen.

Condition 2 viewed from the same clerical perspective is easily described as being well intentioned?

Condition 3 or the Pell, pope etc special effect outweighs the bad effect in circumstances sufficiently grave to justify causing the bad effect and the agent exercises due diligence to minimize the harm or whatever it takes.

In Pell's mind and the minds of other clerics and the compromised may well have seen him able to testify that he had exercised due diligence. Condition 3 met.

the bad effects were not really that bad (long established and upheld cognitive dissonance) because the end justified the means; the clergy get to heaven with an unblemished record. The children should have been grateful they were able to provide a service and to help the priest in a time of need.

The children were seen to have betrayed all of that when they began to find their voice so they could speak out. The Church has demanded a criminal level response aimed at further harm of those who exposed some of the reality of the catholic religion.

Why didn't it matter when it was done to children - simple: they didn't talk about it they could easily be shut up

Do you establish Condition 3 first and develop Condition 2 from that so you can construct Condition 1. There remain the other options of 231, 213, 132, 312, 321 and possibly more methods available through this faulty process that has taken the lives of millions over the lifetime of this religious belief.

That certainly gives flexibility in developing intention (Condition 2) and that is just one way in which Catholic doctrine can be developed and implemented.

That this is a process that is evident and open within the Catholic religion should frighten every remaining Catholic to the point of registering their last will and verifying that no deathbed changes are possible.

There are no laws against that just as you would expect from a mature cover up of almost 2,000 years duration.

Is this insane and unreal? Yes, yet it is how the Catholic Church has determined many of its doctrines.

The ability to justify a desired outcome under this 3 step process is the most terrifying single Catholic doctrine - it can be automated and weighted to suit any degree of resistance at any moment.

When you have a whatever it takes capability and you are willing to engage that way in social systems like ours you can beat the system and they have done that successfully for centuries based on this limited thinking.

The perfect stuff for a John Cleese sketch and it is a fact that the worlds largest religion with the only one true God who was also the creator of the universe and the most powerful entity to ever exist plays games with the lives of humans who have evolved from slime moulds or from more indistinct predecessors from heated or electrified mud pools into a divine deity playing games with the lives of the billions of years of evolved life on planet earth. Added to that the Catholic Church is the only entity on the planet currently who is infallible in its doctrine and yet has gotten the rape of children issue wrong repeatedly by consecutive popes.

Next >> Stealing the life and human rights of Catholic children; a field guide to understanding the plight of the human child  Trauma in Religion

The inability of a child to thrive in a God based rape culture can never be the product of a fault with the child.

There is no future for children or humanity in a society that repeatedly forgets how to protect its children and its most vulnerable by constantly hijacking the rights of the child to appease and to account for the failures of the only infallible man on the planet who along with his clerics consistently gets the rights of children as wrong as it is possible to be.